The Throgs Neck Bridge is a suspension bridge in New York City, carrying six lanes of Interstate 295 (I-295) over the East River where it meets the Long Island Sound. The bridge connects the Throgs Neck section of the Bronx with the Bay Terrace section of Queens.  Opened on January 11, 1961, it is the newest bridge across the East River and was built to relieve traffic on the Bronx–Whitestone Bridge, 2 miles (3.2 km) to the west. The Throgs Neck Bridge is also the easternmost crossing of the East River. Due to this and its proximity to I-95, it is the closest route from Long Island to New Jersey via the George Washington Bridge, as well as points north. 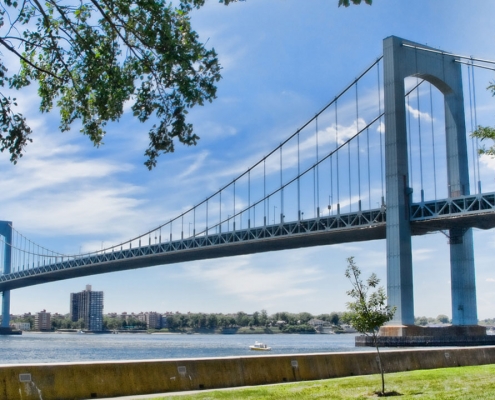